The Pachamama in the Andean worldview 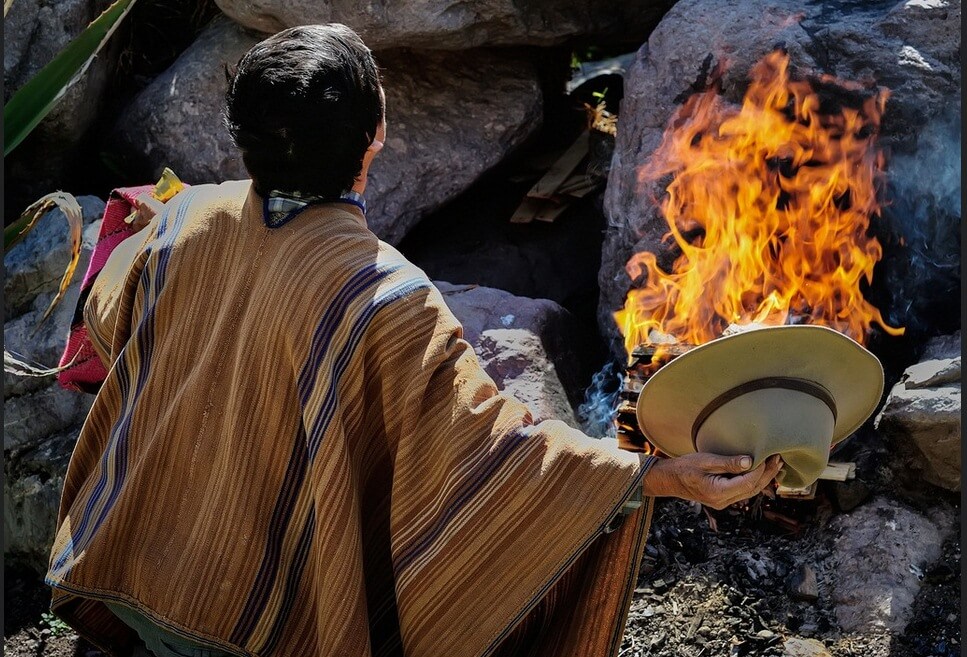 The most common meaning for Pachamama is “Mother Earth.” “Pacha” for the Quechuan villages and towns and in Aymaran its equivalent to earth, universe, world or cosmos, time and space. It is usually used as meaning: “EARTH”. Moreover, “mama” where the meaning of  mother originates, she who who conceives life or (“Paqarina”).

Pachamama, or “Mother Earth” or “Cosmos” is everything put together, in all these traditions it’s more than the sum of its parts, (similar to the Gestalt Psychology Theory).What affects one part affects everything and vice versa (Systemic Theory). Pachamama, according to the Andean worldview is present in everything, and is everywhere (space/time), hence her vision is holistic (Holistic Theory), because in the world of man affects or has an influence one of its elements, doesn’t necessarily affects the rest. Like our organisms are indispensable within our organs they are interdependent, in the living organism, the organism is present in each and every one of the organs independently. This is a community a united world in which there can be no exclusion. Everything, (either a man, a tree, a stone) is as important as any other. The Pachamama holism is in itself, a collectivist world, affected by a feeling of belonging, one always knows who is a member of a community whose membership feels intimately involved. This community or (Ayllu) lives in us all,Thus the experience of unity of life is lived to the full in the human- Andean worldview.

Pachamama is also defined like a god, a goddess woman par excellence wife of (Tata Inti) who’s  “Father of the sun”), the protective while promoting and providing fertility, with constant dialogue that is present in nature and all that surrounds us. To dig a little deeper into the meaning of Pachamama we have to review some aspects of the Andean worldview.

Pachamama could be seen as a (“a thousand year old ritualistic practice an official religion”) that survives in the Peruvian Andes, Bolivia and northern Argentina. The form and content of their practice varies according to the geographical and social environment. There are no unique settings for the traditions and rituals of Pachamama, but there are common elements that still remain, the community (Social Inclusion) and the communities wellbeing (“ayllu”), (Ayni) is  the Way Of Reciprocity and the Most Important Principle of the Andean People, whose main tribute to the land, are their offerings, or payments (“challa”); which is Gratitude and permission for the use of the land and water (as a form of reconciliation with nature). Harmony with nature is evident by the close relationship with the respect of the spirits of Pachamama. 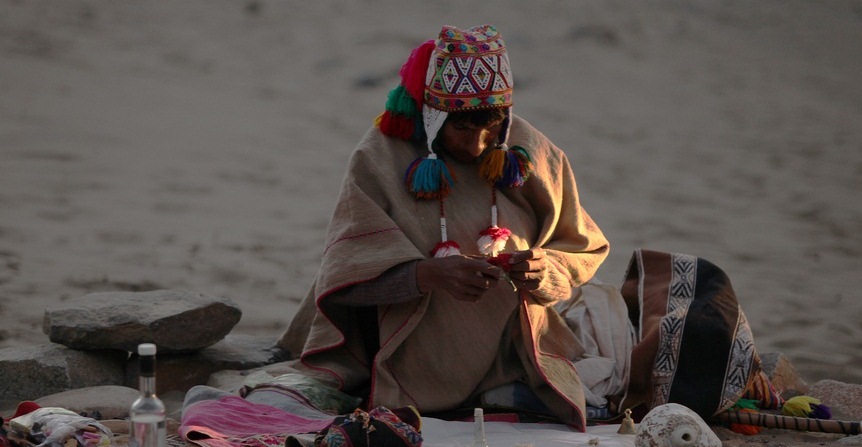 Part of reciprocity in the intewrchange with the Pachamama implies that it has needs, which requires certain symbolic elements that nourish her appetite, some of which are similar to what humans like, (coca leaves, snuff, drinks, candy, tobacco etc.) According to the Aymaran tradition, during the month of August, the Pachamama will be encountered with her mouth open because she is “hungry”, during this time she prepares the land, for the time of the harvest or (cosecha) and we should thank Mother Earth for its fertility.

The month of August is considered the month of Pachamama, the first of August in many places is the principal day of the festival. Elsewhere, the Pachamama ceremony is held every first Friday of each month or at particularly special (“marriages”,”birth”, “openings”, etc.)

With the Spanish presence on the continent called the “era of eradication and idolism”, the animistic beliefs of the indigenous, high Andean cultures were virtually extricated. The Pachamama ritual is one of the few pre-hispanic “archaic paradigms” that have survived despite attempts to stop it. In Peru, what has also contributed to its demise is internal migration, Andean people relocating towards the Peruvian coast and to other cities in general. This phenomenon of migration resulted in the gradual loss of cultural heritage and the Quechan and Aymaran languages, leaving only the memory of ritualistic practices like the Pachamama. Moreover, many migrants or townspeople (pobladores), in the process of socio-cultural adaptation they assumed to use the official Spanish language and convert to the Catholic religion. In the best case, through cultural syncretism, both practice as a form of symbiosis or merger formed an ethnological mosaic. It is common to find in ceremonies to Pachamama and the apukunas mountain spirits with images of saints, using the Cross and the Virgin Mary (“Virgen de la Candelaria”). Among these elements there is no confrontation, power struggles or egocentrism. No confrontations but a form of peaceful symbiosis (Andean townfolk are at peace par excellence). There is a kind of cultural adaptation that assimilates and uses two or more of the elements as one.

Pachamama has a very important role in the Andean worldview, their presence in the cosmos is carried out in three stages or phases Kaypacha : the present or this world , Ukupacha: the past Jananpacha: the future, the psychoanalytic correspondence would be: conscious, subconscious and sopra consciente.

1)    The Jananpacha, is the earth above, superior to the sky it’s the sphere of Inti (the sun), the Quilla (moon) Coyllur (stars), Illapa (lightning), Huayra (wind), Kuychi (rainbow) chakana (southern Cross) and Paras (rain) which is fruitful. The Colca Hatun (large grain warehouse) is the Milky Way. Mallqui (tree) which shares the three worlds (root, stem and fruits). Home to the ancient gods (Achachilas and Ñawpas), bound together in the spiritual world, the future and the refined life energy (Sami). The condor is the animal emblem; it feeds on carrion and then flies by the highest mountains in the heart of the Andes. It is the symbol of the teacher who transmuted their flaws into virtues …

2)     Kaypacha: It is the middle ground; here temporarily dwells Pachamama passing through the three planes. Los Apus and Los “wamanis” (Spirits of the mountains) are considered their representatives and guardians. It is in this channel where the Andean people carry out their dialogues with the spirits,

3)    after offering a vicuna to mother earth is called “ganadito Apu” because they belong to the mountains. The cougar is the animal that represents Kaypacha

4)    Ukupacha: Relates to the depths of the earth, the underworld, the past, here meets water (Yacu) in all its forms. Hatuncocha is the sea. The river is (mayu) that is always in constant motion; “La cocha” is the lake. The “puquio” (is the spring where the water flows). The world below or “Uku pacha” is represented by the snake.

The Quechua traditions that have the hills or (Apukunasthas) harbor the spirits of the gods, who lived before a great flood and had the audacity to give the knowledge to build the first human civilizations. As punishment, the other god locked these Andean Savior in the mountains. They are called first home or “Nawpa”, and also “Wamanis”, and are housed at the top of the mountain. Andeans say that Wamanis descends from the highest peak of the mountain, and comes to talk … to whisper their ears and inspire.”

Just as in the East there is the concept of complementary opposites like Yin Yang, in Andean culture as they manifest as “Tatainti, Viracocha” Father of the Cosmos and it’s complementary opposite the Pachamama, Mother of the Cosmos, which is represented in the world of forms by a square (male parent) and the circle (female parent) and the mountains can be distinguished as male or female, according to the predominance of its forms. In the profile or silhouette of a mountain, we can see the representation of the sacred snakes passing from the underworld Mountain “Ukupacha” to the upper world “Jananpacha”, the snake called “Sachamama” travels the road from the base to the apex in a straight linear path in vertical lines, turning to reach “Janampacha” in the Rainbow, which represents, vitality and fertility. The Serpent called “Yacumama” walks the path in wavy lines, transfigured upon arrival at Jananpacha in the Lightning and Rain. The three worlds are connected by these two snakes, goddess of water and fertility. The Andean cosmic harmony is called “Pachamama Yanantin”, those responsible for this harmonic order are the sacred mountain dwellers (Apukunas) the “Achachilas”, and “Los Ñawpas Wamanis”.

For the Andean world is living as a whole. The whole is more than the sum of its parts, therefore it is incomprehensible to the separate parts of the whole even if it was defined as one embedded within the other and where each part reflects the whole (Andean holography). This whole world is conceptualized and lives like an animal, like a puma can react with unusual ferocity when he is attacked. The natural “whole” or (Pacha) community; comprising of various and variable living communities, of which in turn represents the whole.

This community  is made up of the natural the “pluriecológica”  or natural habitat such as the soil, weather, water, animals, plants and the landscape in general, a multiethnic human community that understands the different people living in the Andes and the community of deities telluric and celestial, who are granted the status of “Waca” or holy place in the sense of giving them more respect, having lived and seen so much, and to have accompanied our ancestors, and accompanied the children of our children.   These communities are related through a continuous and active dialogue, reciprocity and effective redistribution, each community is the equivalent of any other, and all have the same value, no value. and therefore they are all important, they deserve respect and consideration, in the Andean concept that is expressed when it is recognized that everything is sacred, it is sacred land, the hills, (Apus, Achachilas, Wamanis, Auquis), the stars, the sun, moon, lightning, rocks, our dead, rivers, streams (“puquio”), lagoons, living human beings, animals and plants, not only cultivated but also in the wild.